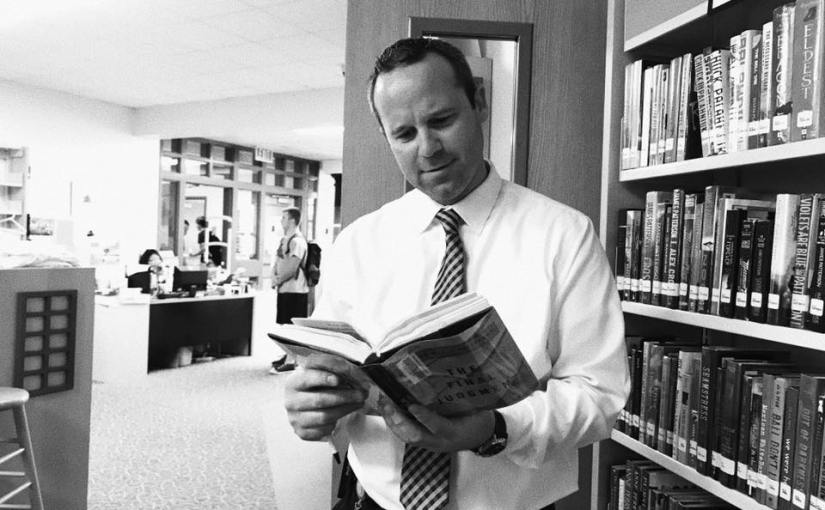 I had Mr. Cassel for three classes throughout my junior year: English, Literature of the Holocaust, and Discussion and Debate. He was different than other teachers I’ve had for two reasons. One was his story – the way he grew up and his openness in sharing it with us. The fact that he didn’t hesitate to tell us about where he came from played a big part in how we viewed him. He showed us that he was human and that he came from a lot less than many of us did. Mr. Cassel grew up with ten siblings, the majority of them adopted.

“Even though I was surrounded by people, it was kinda lonely.”

However, there was a large age gap between his older siblings, his younger siblings, and him. The only one he was close to in age was his sister.

“My sister is my same age but she’s severe special needs. So she was like my closest friend.”

His huge family wasn’t as close-knit as you might imagine. He grew up fairly poor (he still has no problem eating his cereal with water instead of milk). He wasn’t supervised much because of the attention his other siblings required, but he didn’t see that as an excuse to slack off or behave poorly.

Following a nasty divorce, he didn’t see his father from the time he was nine until he was seventeen.

He often told us stories about the struggles he faced as a child, but he never seemed bitter or resentful. He spoke highly of his father, despite what had happened when he was young.

“I’m a big believer that holding a grudge is not a good thing. There’s no real reason to. Even all the way up to the point where he died, he was always trying to apologize and I never let him. I always told him he never had to.”

The adversity he faced as a child is the biggest reason that he became the person he is.

“I play a very active role in being a parent. I enjoy spending time with my kids … I always try to make sure that I do the right thing and spend time with them. So I coach all their sports. Even though they sort of don’t understand anything different, so I would probably say my kids take it for granted at this age. But they just assume everybody’s dad’s the coach. And I try to talk to them a lot and tell them about me as a person – good and bad, flaws and things that are good.”

He makes sure his kids get the time and attention he missed out on for a long time. He was able to turn those difficult experiences into something positive for his own kids.

“I will be a successful dad if my kids are good people – whatever that means. It has nothing to do with their careers. It has nothing to do with how much money they make or where they live. But I guess it’s really about how they live their lives. If I’ve done a good job, then they’ll be successful in whatever they do. But I just want them to be really good people – compassionate people for other people.”

While it shaped who he is as a dad, it also put him on the path to becoming a teacher.

“Because I didn’t have a dad for a decade, my teachers and my coaches, my friends’ dads – they all became like pseudo-dads. I always looked at my teachers and they were always smiling. And I thought that would be a great job. And they always seemed like people who I wanted to be like.”

The second reason Mr. Cassel stood out to me is the way he taught. As a student, he’s one of the few teachers I’ve seen who’s aware of the impact he has.

“I am always willing to, figuratively speaking, take the shirt off my back for people. I would go out of my way to make sure I help others. So I guess that’s the core of teaching; that’s what you do as a teacher. But that goes past the school day into my personal life.”

Mr. Cassel’s class came at a time when I needed it most. While a lot of my appreciation for the class came from the material, a lot came from the way he taught us. If I hadn’t had Mr. Cassel for eleventh grade English, I would probably still not know what path I wanted to take in life.

I realized this during a college visit last winter. The speakers talked about the importance of following your heart. They said to start by thinking about the classes you love going to, and figure it out from there. That’s when it became clear that English class was the only one I consistently looked forward to. Mr. Cassel was one of the people who encouraged me and made me truly excited for the future. I was at such a tipping point. If somebody told me that my writing wasn’t good, I probably would have abandoned it completely and pursued the wrong path in life. I know my writing wasn’t the best he’d ever read, but he made me feel like I had potential. Little things – like the comments he left on our essays – made a big difference in my case.

He helped start a fire – a passion for storytelling and creating – something that might be more important than raw talent itself.

To any teachers (or anyone people look up to) reading this: show interest in your students. Talk to them – about them and about you. Encourage them. Tell them when they’re doing a good job. You may not make a huge difference for every single person, but you will make a critical difference for many. We can tell when a teacher loves what they do, and when they just want to get grades in the book. Be the difference between having to go to class and getting to go to class.

To any students (or anyone who looks up to someone) reading this: if you have a teacher that’s moved you, thank them. Let them know. It’s important for people to hear that they’re doing a good job.

I used to wonder how Mr. Cassel was “just” an English teacher. He seemed so much bigger than what he was; it always seemed to me that he had the potential to be extraordinary.

The longer I was in his class, though, I began to realize that I was wrong. Mr. Cassel loves what he does. He goes out of his way to let people know they’re cared for. He impacts lives every day.

You may not be in the spotlight; you may not receive constant praise and attention. But if you work hard and love what you do, you are unquestionably extraordinary.