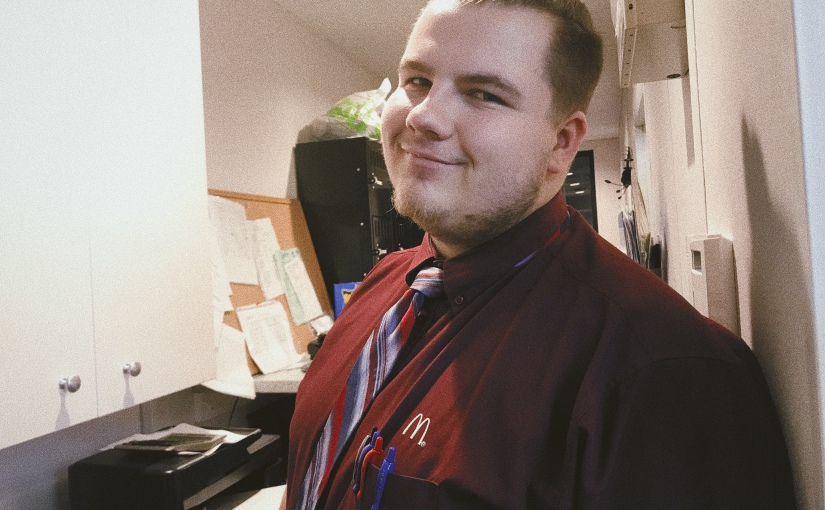 When people look at Alex, they see boldness. He’s impossible to forget, constantly cracking jokes and telling wild stories to anyone who will listen. There is always something to laugh about; no topic is too extreme. His outrageous sense of humor and unapologetic attitude lend themselves to his air of confidence.

“When they would argue, it would be in front of us and they would throw stuff at each other and it was violent. It wasn’t just an argument in the room; it was a violent outbreak.”

Growing up, Alex was very close with his twin sister. They endured many things together: their parents’ divorce, conflict between their mother and her boyfriend, and abuse by said boyfriend. But no matter how difficult things got at home, he always had his grandfather to turn to.

“Every summer from eighth grade to my junior year I would spend with my grandmother and my grandfather. My grandfather was a diabetic so one of my favorite things was giving him his insulin shots. Just because I always wanted to be a doctor and it was something you could do and actually get real-life experience with it. And me and him would go fishing all the time. He would let me drive when I didn’t have my license.”

The two of them were more like best friends; his grandfather was always his biggest supporter in everything he did.

As Alex neared high school, he started to realize that he was different than the boys around him.

“I knew I was gay when I was twelve years old. The reason why I knew was because I was dating girls and it never seemed right to me. It was never interesting – it was always boring. So then one day I saw this guy and I was like ‘Oh wow, he’s really cute.’ And I was like ‘Wait, this isn’t normal for guys to be staring at other guys and not staring at girls.’”

He came out to his extended family around the Thanksgiving dinner table.

“To my parents, I came out two weeks before. And my stepmom literally looks me in the eyes and goes ‘I knew it.’ And then my dad goes ‘Yeah, I know too. I love you. You’re my kid.’”

Through this entire process, his grandfather was a constant ally.

“My grandfather would ask me if I was talking to anyone, if I was dating anyone. My grandfather drove me and my boyfriend on our first date … He was not very open when he was younger, and he said that was one of his biggest regrets – not being more accepting. Because he had a real small circle and he was well-liked by a lot of people, but they were people who were “normal”. When I came out, it kind of changed his eyes because he was like ‘I’ve raised this kid for ten years’, ’cause he lived with us. He took us to school every day, he would cook for us, he would take us fishing, he would take us shopping – he would do everything with us and he never knew. So he was like ‘If for ten years I raised you, I was there with you every day…” … I wouldn’t say it forced him to change, but he was ready to change. So it definitely opened his eyes to being accepting more to other people.”

While his family accepted him without hesitation, he was met with a different reaction from his peers.

He compared life as an openly gay male to life as a closeted male.

“When you come out, you start to realize that you’re different and everybody – some people view you differently out in public. If you look like a straight male, they just don’t look at you, they don’t judge you. But then when you go out there and you’re yourself and you’re gay, people look at you differently. That’s definitely one of the obstacles that I had to overcome, was being confident enough to go out in public and be myself. One of the biggest obstacles I had to overcome was just being comfortable with my weight, my sexuality, and just going out there not caring about what other people think about me and just being myself.”

Alex has always seemed to radiate confidence. I was shocked when he revealed his insecurities.

“I definitely have a lot of self-image issues … I don’t have confidence issues – I can go out and be myself and be happy – but I definitely don’t like looking in the mirror.”

We want to believe so badly that we know the people around us. But sometimes we only know the character they play.

“I put on a front everywhere I go that I’m this crazy, loud, outrageous person.”

Along with his self-image issues, Alex struggles with depression – a disease that runs in his family. He believes that he’s so successful in his job because working gives him something to focus on.

“One of the things that always distracted me from my depression was work. Because when you go to work, you’re not dealing with your life issues. You’re just there doing what you’re doing. So that’s why I work all the time. Because when I’m here, I’m not focusing on my outside-of-work issues; I’m always here, in the moment, doing what I’m doing.”

Alex’s grandfather obviously played a crucial role in his life. Along with teaching him his work ethic, he always gave Alex a safe place to turn. Sadly, his grandfather passed away a few years ago.

His grandfather was the most defining person in his life.

“He’s the person that I look up to with my work ethic … Every day I come to work and it’s like ‘How would he look at this situation? How would he handle this?’ because he owned his own business for thirty years. So every time I’m working, I live my life to his expectations. So he gave me this good outlook on my attitude with work and money and he taught me about investing, but it’s definitely changed me because now I don’t have that person to go to all the time. I don’t have that best friend that no matter what was going on, you could tell and he wouldn’t go behind your back and spread it around. You have best friends that are your age but they go around and they tell everyone and all that, but my grandfather didn’t. Everything we talked about was between us … it’s definitely like I lost a true best friend, the person I could go to every single day.”

He’s also learned many things from his job. He became a manager of the McDonald’s at which we work before even graduating high school. People can be quick to discredit “living wage” workers. However, there are some very valuable lessons to learn in simple places.

Through his job, Alex has formed relationships with customers and coworkers and learned that hard work is important at every level.

“It’s definitely my strive to learn and to work that allowed me to shoot up.”

I’ve worked with Alex since he was hired and I see his commitment firsthand every day. He doesn’t see the adversity he’s faced as a setback, but as something to learn from. So many people don’t see the hard work he’s put in to get to where he is now. Alex is someone I look up to every day as living proof that committment and passion bring amazing results.